Stroke Awareness Month: warning signs and how to reduce your risk 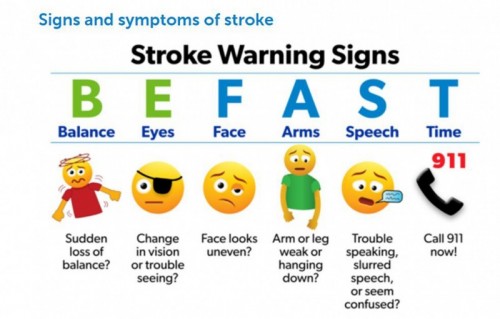 Sixty-six-year-old Gary Spahn was at work when he experienced a stroke. He was talking with a group of colleagues when he suddenly found that he couldn’t speak. He felt fine and wanted to participate in the conversation but physically couldn’t. He explains that although he knew the words he wanted to say, they simply wouldn’t come out. A coworker noticed something wasn’t right and asked him if he was okay. He tried to say, “I’m fine, I just can’t talk,” but the only words that came out were, “I’m fine.” Fortunately for Gary, another coworker sensed something was off and quickly dialed 9-1-1.

“I don’t know what I would have done had I not been around other people,” said Gary. “I could think clearly and my mind was working fine, I just couldn’t talk. I was very lucky my coworker recognized this as a sign of a stroke.”

An ambulance arrived within minutes and Gary was taken to a nearby hospital. There, the doctors in the Emergency Department were quickly treating him for a stroke. They gave him an IV thrombolytic to break up the clot and discovered he had a large vessel occlusion, which means a big artery in the brain was blocked. Therefore, he was transported by helicopter to Lutheran Medical Center. When he arrived at Lutheran, Gary went for an emergent procedure called neuroendovascular thrombectomy. As Gary recalls, they inserted a “vacuum” tube (known as mechanical aspiration), into an artery that went through his heart and to his brain in order to remove the clot.

A stroke occurs when blood flow to a part of the brain is blocked, called an ischemic stroke, or when a blood vessel in the brain bursts, which is a hemorrhagic stroke. In either case, the brain cells are starved of oxygen-rich blood and a stroke occurs because those brain cells die. Stroke can lead to brain damage, disability, and death.

“I was conscious when they transported me to the hospital and I was told I was being taken to Lutheran because their stroke specialists provide superior care,” said Gary. “They were right. The doctors were great. I’m really glad they were there and knew what to do.”

The doctors told Gary there was no way of knowing how long the clot was in his brain and that he was lucky he was with other people who recognized the signs of a stroke and called for help so quickly.

When it comes to a stroke, every second counts. Each minute a large vessel occlusion stroke remains untreated, nearly two million brain cells die, and rapid access to medical treatment can often make the difference between a full recovery and a permanent disability. Some treatments only work if given within the first three hours after symptoms start, and a delay in care can increase the risk of permanent brain damage or death.

Knowing the signs is key, and the acronym B.E.F.A.S.T. is a useful tool to remember what to look for and what to do if you suspect you or someone you know is having a stroke. B.E.F.A.S.T. stands for sudden trouble with your balance, eyes (change in vision or trouble seeing), face drooping, arm weakness, speech difficulty and time to call 9-1-1.

“I’ve been out of the hospital for two weeks and am getting stronger and feeling good,” said Gary. “I’m a little more tired than normal, but the doctors put me on new medications, including a blood thinner, and it’s helping me to feel better.”

Having one stroke increases a person’s risk of having another. Although there are several factors that are beyond your control that can increase your risk, like age, sex and ethnicity, there are many factors you can control that will help reduce your risk. Unhealthy habits, such as smoking, drinking too much alcohol, having a poor diet and not getting enough exercise all increase your chances of having a stroke. High blood pressure, high cholesterol, diabetes and obesity can also increase your risk. However, treating these conditions can greatly reduce your risk. It is important to eat plenty of fruits and vegetables, limit foods high in fat, cholesterol and salt content, get enough exercise, limit alcohol consumption and if you smoke, quit.

May is National Stroke Awareness Month and a reminder that, while a stroke can happen to anyone at any age, 80 percent of all strokes are preventable through healthy lifestyle choices.

Media Contacts
SCL Health welcomes the opportunity to work with local, national, and international media outlets. We are always available to respond to your questions and help support your newsgathering efforts.

Stroke Awareness Month: warning signs and how to reduce your risk