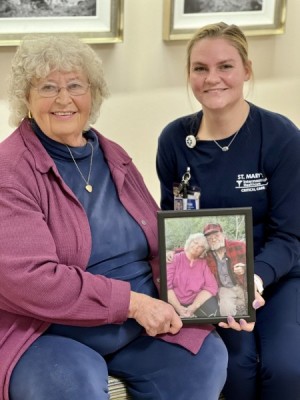 It is the time of year when we all count our blessings and give thanks for all we have. Sometimes, those blessings appear in places and in people you’d least expect. That’s precisely what happened to Don Jenkins, a patient at St. Mary’s who had a rare cardiac disease with a terminal prognosis.

Don had surpassed the average lifespan for the type of disease; when he arrived at St. Mary’s, Tifani Pensyl, an ICU nurse working the night shift, had the honor of caring for him in his final days.

“He was so incredibly sweet and thankful, and there was something about him that struck me,” said Tifani. “It’s always tough when caring for someone at the end of their life, but he had so much gratitude and was very caring. We just clicked. We talked that night and the following, and he told me a lot about his life and wife of 30+ years.”

Don’s wife, Nicci, is a registered nurse who worked at St. Mary’s 15 years ago.

Tifani’s supervisor informed her that the following day was the Don’s wife’s birthday and suggested they do something nice for her. That was all it took. Tifani returned to his room and asked what he wanted to give her as a gift. He looked surprised but said he would love to get her a gold locket from the gift shop and the couple’s special poem by F. Scott Fitzgerald inside of it. He also said her favorite color was purple.

Tifani, determined to make it happen, headed to the gift shop, but it was closed. She knew it would also be closed when she returned for her shift the following day, so she searched elsewhere.

“I went to Walmart, but the jewelry department was closed, so I went through the rest of the store looking everywhere,” Tifani said. “I couldn’t afford a gold locket, but I found a three-pack of "best friend" silver-colored lockets that I spray-painted gold. I also ordered a bouquet of purple flowers with a happy birthday balloon.”

She then went home, typed up the poem, and printed it as small as possible so it would fit inside the locket. It was trial and error, but in the end, it fit perfectly inside. 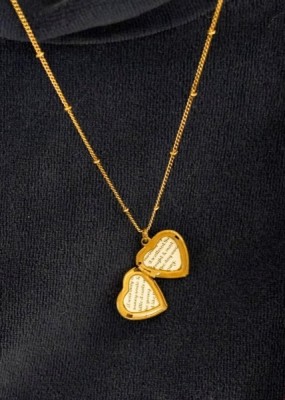 That night, Don took a turn for the worse, so Tifani called Nicci and told her to come to the hospital immediately since she didn’t know if he would make it through the night. His wife stayed in the room with her husband, and when the clock struck midnight, Tifani was there to tell her happy birthday.

He ended up making it through the night, and in the morning, Tifani gave him a bath, combed his hair, and gave him the locket and flowers to give to his wife.

“I put it in his hand and said, ‘everyone deserves a birthday gift,’ and he started to cry,” she explained. “He prayed and thanked god for his wife and for me. It was one of the sweetest moments I had ever experienced.”

He recited the poem from memory to his wife, and she began to cry. They all hugged and expressed gratitude for one another.

“Nicci asked me if I had ordered the flowers and how I was able to pull it all off,” said Tifani. “I told her it was because her husband loves her and would do anything for her. She was so thankful and told me I didn’t have to, and the only thing I could say was that I wanted to.”

That night, Don had a stroke and lost his ability to speak. Fortunately, he recovered by morning, remembered everything that Tifani had done for his wife, and was beyond grateful.

Don and Nicci wanted him to go home and pass peacefully in his own bed, and Tifani was determined to do everything in her power to make that happen.

“I told his wife we could manage his needs and have an ambulance take him home where hospice would be waiting,” said Tifani. “She had no idea that was an option and I told her though it doesn’t happen often, we would do just about anything to give someone their last wish. Don was crying and hugging me and told me that God sent him angels and that I was one of them. As a nurse, you care for and love your patients but don’t think of yourself as an angel. It is my job, and I love doing it.”

A few days later, Tifani was told he had gone home, but she didn’t know anything beyond that. Soon after, St. Mary’s honored her with the Daisy Award for going above and beyond in her compassionate care for him and his wife.

“I left the Daisy ceremony and looked up the Grand Junction obituaries,” she said. “I learned he had passed, but the first sentence read, ‘he passed away peacefully in his home,’ and I was so grateful that I could help make that happen. I love my job, and it truly is an honor to be able to care for my patients during some of their most vulnerable moments. Nurses are the bridge between the patient and their loved ones, so we’re not just treating them, we’re treating the entire family. Sometimes our job isn’t strictly medical; it’s also supporting them emotionally in their toughest moments. I strive to ensure families can remember their loved ones in their best light instead of at their worst time.”

“Tifani and the other staff at St. Mary’s created an environment for Don and I where we could come to acceptance together that Don was not going to be able to get better and his days were short on this earth,” said Nicci. “That surprise birthday party in the ICU in the middle of the night is forever etched in my memory. Tifani made it possible for my beloved husband to demonstrate one last time to me the depth of his love for me.”