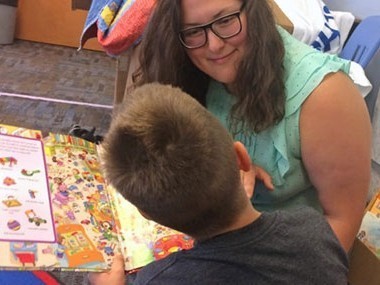 Denver, CO - From nearly the moment he was born, Paul was dealt a losing hand. His mother, barely in her teens, was living with her dad, had dropped out of school, and lacked effective parenting skills. After her father passed away, Paul’s mother was too overwhelmed to care for her child, so the three-year-old was taken in by his maternal aunt.

Over the next several years, Paul bounced from home to home as custody disputes resulted in constant upheaval. Paul experienced the chaos and turmoil of different households; shifting expectations; and the uncertainty of people moving in and out of his home with children, dogs and babies in tow. Chronic instability was his norm.

Receiving little adult guidance and with no one to model himself after, Paul’s behaviors became unmanageable.

Mount Saint Vincent’s approach to helping children like Paul casts off the punitive model that punishes children for unwanted behavior. Instead, the agency uses a highly relational and respectful approach. “Instead of asking ‘What’s wrong with this child?’ we ask, ‘What happened to this child and how can we help?’” explains Executive Director Kirk Ward, LCSW. The difference in outcomes is astounding.

Over the next two weeks, Paul’s care team of school staff, therapists, and educational mental health workers reviewed his case, observed his behaviors, and came up with a treatment plan. Their goals as an agency were to raise his self-esteem, help him with emotional regulation, and teach him healthy coping skills.

“When I first asked him to name some emotions, he could only come up with two: happy and sad,” said Child and Family Therapist Courtney Hadjeasgari, MA, LPP. “We worked on identifying various emotions and what they feel like in our bodies.”

School presented its own challenges. At first, when Paul struggled with academic work, he refused to ask for help; he would give up and run out of the classroom, nearly in tears. “He was extremely frustrated,” said Special Education Teacher Alex McCall. “It took some time, but we eventually identified several tools that helped him stay regulated enough for him to focus on his school work.”

Animal-assisted therapy helped Paul build relationships. Learning to interact safely with an animal often translates into the ability to form human friendships. But it was art therapy that helped Paul turn a corner. “It’s 100 percent his platform, where he is the most comfortable and himself,” said Courtney.

Paul recently completed a past-present-future art activity with his art therapist, Christine Ratcliffe, MA. The extensive project detailed what his life had been like and what he wanted it to look like moving forward. “It’s both artistic and incredibly self-aware,” Courtney said.

Six months later, Paul is a different boy. In school, he raises his hand and asks, “I’m stuck, can you help me?” He participates in classroom discussions, offering insightful thoughts and ideas. He was elected to student council and was named “Student of the Week” not once, but twice.

“We’re so proud of him and all the incredibly hard work he has done,” said Alex. “But best of all, Paul is proud of himself.” And that is exactly as it should be.

SCL Health is a faith-based, nonprofit healthcare organization dedicated to improving the health of the people and communities we serve. Founded by the Sisters of Charity of Leavenworth in 1864, our health network provides comprehensive, coordinated care through eight hospitals, more than 180 physician clinics, home health, hospice, mental health, and safety-net services in Colorado and the Montana Wyoming region.