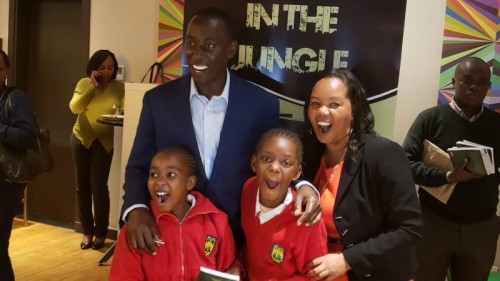 Life changed in an instant for Robert Mwangi in 2015, when he died at the age of 37.

He had spent the day helping a friend move and when they were finished, they drove separately to the new house, his friend in the moving truck and Robert behind in his car. When they pulled up to a stop sign, Robert suddenly collapsed, became unconscious and stopped breathing. Fortunately, there was a fire station nearby and the paramedics arrived within one minute. They broke out his window and pulled him from the car.

Robert experienced a cardiac arrest, the abrupt loss of heart function, resulting in near death. The paramedics were able to resuscitate him and rushed him to the hospital. He spent five days in a medically induced coma and the doctors put a defibrillator in his chest to monitor his heart rhythm. This would restore its beating if it suddenly stopped again. They also prescribed him medication and told him he’d have to take it for the rest of his life.

“I couldn’t believe I had gone from being the healthiest guy in the world to the weakest,” said Robert. “I was in shock and had to readjust my entire life. I carried around an oxygen tank for three weeks and was down for the next six months. I couldn’t believe that I had actually died.”

His doctors told him they didn’t know what caused his heart to fail. His arteries were clear of any blockages. He didn’t have high cholesterol. He was young, fit and active. There were no red flags.

“They told me they didn’t know why it happened,” said Robert. “This, however, was not the first time I was given no answers.”

Two years before his cardiac arrest, Robert woke up in the middle of the night and knew something had happened with his heart. He just didn’t know what. He was alarmed enough to drive to the nearest emergency room, where he spent 14 hours undergoing a battery of tests, including an EKG and a stress test, and was told there was nothing wrong with him and he was sent home.

“About six months later, it happened again,” Robert said. “I drove back to the ER, where they performed every test imaginable, and again, I was told that nothing was wrong with me.”

Over time, he slowly got better. He began walking, then running, and eventually started playing soccer again. Robert, who is a natural born athlete, moved to America from Kenya in 2002 on a soccer scholarship. He was thrilled when he was finally able to get back to playing the game he loved so much. Things were going well and he was starting to feel like his old self again.

Since he was feeling much better, he decided to stop taking his heart medication. He wasn’t sleeping well and thought the pills may have had something to do with it. Soon after, he was at work and his heart began racing. He tried deep breathing to calm down but it didn’t work. Luckily he had the medication with him and he was able to take a pill to slow down his heart rate.

In 2021, Robert met with Donald Rabor, MD, Medical Director of Cardiovascular Services at Platte Valley Medical Center, and Medical Director of the Heart & Vascular Institute in Brighton, because he was having heart palpitations and felt tired and weak.

Dr. Rabor refused to accept that Robert would need to take pills for the rest of his life. He kept insisting there was another solution, so after studying the information from his defibrillator, he was able to determine that there was a particular part of his heart, specifically the lower chamber or ventricle, that would beat extremely fast, competing with the normal rhythm of Robert’s heart. He was told that this abnormality was known as ventricular tachycardia or VT.

Dr. Rabor recommended a procedure called an ablation, which cauterizes specific areas of the heart to help break up the electrical signals that cause irregular heartbeats. If successful, Robert could stop taking his medication. John Ferguson, MD, a Cardiac Electrophysiologist, who specializes in heart rhythm abnormalities, performed the procedure.

“It took me two seconds to say let’s do it!” Robert said. “I was thrilled at the idea of not having to take pills anymore.”

The procedure was a success. He was out of the hospital in a matter of hours and back to work in two days. And the best part of all, he no longer required medication.

“I’d never felt so good in my life,” said Robert. “I was getting the best sleep I had in years. My heart was better and my oxygen levels were great. I felt like I got a second chance at life and I am so grateful. I know if I wouldn’t have come to Platte Valley, I might not be here today.”

After his experience, Robert had a new outlook on life. He had finally reached the point where he was able to slow down and reflect on all that had happened and all that he’d been through. He wanted to take his experience and turn it into something positive, so he began writing. Day after day, night after night.

“All of a sudden the 13-year-old me who used to write stories came rushing back,” he said. “I had no idea what I was going to write, but I couldn’t stop. I didn’t know what I was doing and I had no training, but I was able to take free writing classes at the library and I absorbed as much as I could.”

He wrote for an entire year and when he was finished, he had filled 600 pages with words. He read what he had written and realized it was the story of his life. It was the story of every young immigrant kid like him who had come to America. It was about chasing your dreams, never giving up, and allowing love to conquer fear. “It” became Whisper in the Jungle. And with that, Robert published his first book.

In June, Robert plans to travel back to his hometown in Kenya to visit his former high school. He purchased 1,260 copies of Whisper in the Jungle to give to every student and teacher, and he’s going to sign each copy.

“This book would never have come to life if I wouldn’t have been saved,” he said. “Had I not sought care at Platte Valley, I could have been dead by now. Dr. Rabor and Dr. Ferguson gave me a second chance at life.”